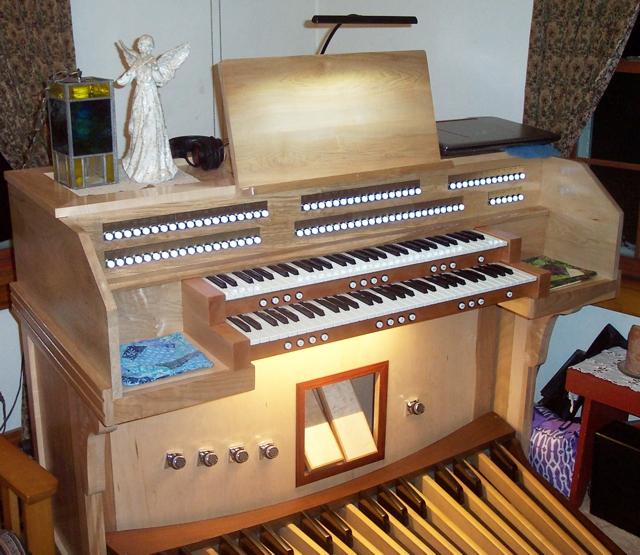 I have documented construction of this organ and published this documentation as an inexpensive book.  To see it on Amazon, click here. 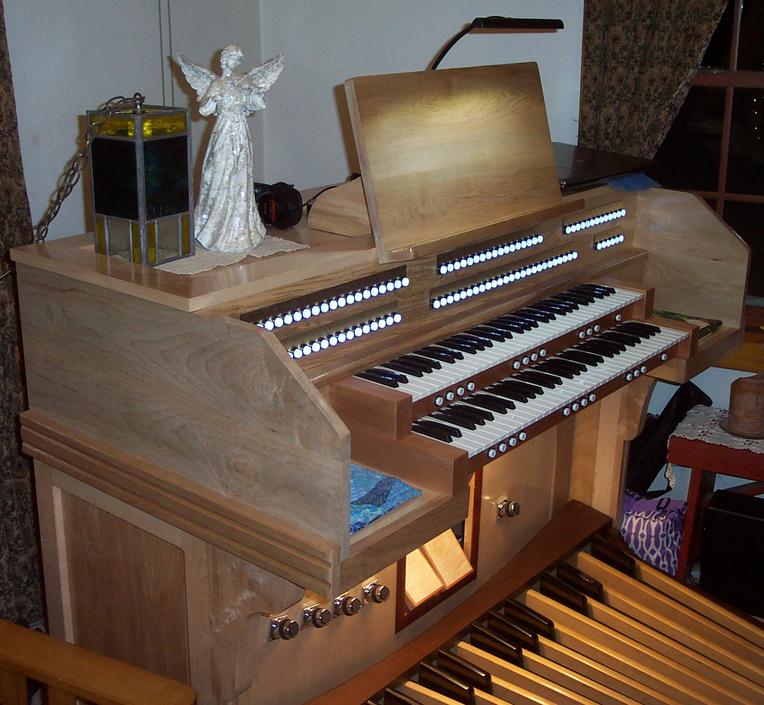 I've just finished (except for final tweaking) my Hauptwerk organ, which I've been working on for the last four months.  I hope that it's an inspiration to aspiring builders, because I'm not a professional woodworker, and all I have in my tiny basement shop is a cheap Black and Decker table saw, a thirty-year-old bandsaw, and an ancient drill press.  My organ is not a masterpiece, but I think it's pretty nice.

Before I cut the first piece of wood, I designed the whole console using 123D Design, a remarkably powerful yet free 3D design program.  That way I could ensure that all measurements met AGO specs for things like height of manuals, setback of pedalboard from key tip of bottom manual, and so forth, as well as height of music rack, front-to-back depth (under 30 inches so it could go through standard doors), width to perfectly enclose the pedalboard (which I bought used on eBay), and a million other limitations.  Doing that with pencil and paper, or in my head (!!!) would have been insane.  When everything was perfect, I could read the dimensions of the components right off the screen.  It felt like a lot of up-front work, but the payoff when construction began was enormous.

It was tempting to build a three-manual console, especially since the cost and work for three manuals is trivially greater than that for two manuals.  However, the main purpose of this organ is to give my wife, our church organist, a high quality practice instrument at home.  Her church organ, despite being the best pipe organ in the area, has just two manuals.  Also, she has a shoulder problem that makes it difficult to comfortably reach a third manual.  So two it was.

Neither she nor I have a lot of interest in exploring a wide variety of organs; we would rather focus on a couple and learn them well.  Also, we both hate touchscreens, as they can be tricky to touch just right.  And of course touch screens add significant width to a console, and we wanted compact.  So instead of using touch screens, I laid out the six grouped divisions of the Rotterdam Laurenskerk organ and access the ranks with lighted stop buttons.  This is enough stops to also handle the large French symphonic Caen St. Etienne organ, which I plan to implement soon.  Between these two complementary organs we'll have more than enough to keep us busy!

The multiple divisions of these two humongous organs are mapped to two manuals using a clever technique suggested by Matt Arnold, who supplied all MIDI components and much valuable advice.  The original Rotterdam Swell (Bovenwerk) is 'permanently' mapped to the console Swell, and the Great (Hoofdwerk) to the Great.  Then, each console manual has three lighted couplers on their piston rails for the Rugwerk, Borstwerk, and Chamdewerk.  Thus, any or all of these three extra divisions can be coupled to the console Swell, Great, or both.  For the Caen, the Grand Orgue permanently maps to the Great, and the Recit to the Swell;  the Positif can be coupled to either or both console manuals as with the Rotterdam.  My wife is still dizzy looking at all those stop choices.

I have three sets of stereo speakers.  The front channels go to a pair of powerful towers paired with subwoofers.  The rear channels go to a pair of Bose 901 speakers on the opposite wall.  Finally, I have a pair of Polk Audio bookshelf speakers mounted high in the center of the third wall, dedicated to sweet solo stops.  It's a good thing we live far out in the country, where the nearest neighbors are the chickens.

To hear my wife play "Lift High the Cross" on this organ, use the audio player below.

If you have good headphones, this recording will sound better on them than with most computer speakers. 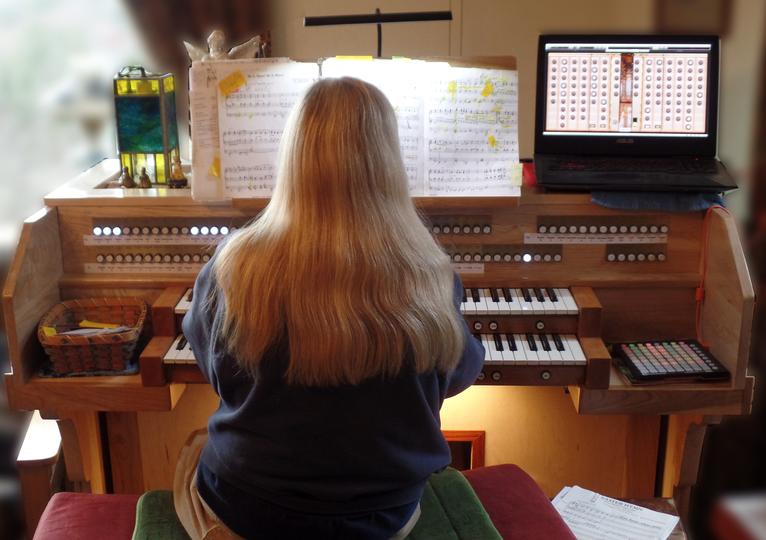