This is a 1938 (I am told by the prior owner) Wicks Direct Electric pipe organ.  It has two full AGO manuals and, at least as I measure it and play it, a concave AGO 31-note pedalboard, C to F#.  There are three ranks: wood stopped flue, metal string, and very soft metal dulciana.  There is also a one-octave reed low extension for the pedals and the 16-foot stops on the manuals.  It contains the following stops:

It has a swell pedal and a crescendo pedal, both of which were fully functional the last time the organ was seriously used and should be able to be made functional with just some contact cleaning.

It is 98 inches tall, from the base to the top of the center facade pipe.  It just barely fit in our house after I cut an inch or so from the center pipe.  But because those front pipes are not speaking, you can safely shorten them if you need to fit it in your room.  It is 64 inches wide and 66 inches deep, from the back of the pipe chest to the back of the pedalboard.  You should add a few inches to that depth to accommodate the bench with a person seated on it. When I first assembled it 20 years ago, I’m fairly certain that it worked perfectly, or if not it was so close to perfect that it did not matter.  My organist wife played it regularly and never complained about any imperfections.  But since I built her a fancy digital organ 10 years ago she has not played it since.  Due to the lack of playing, many of the keys and stop relays have become oxidized and need some cleaning, generally very easy though tedious.

There is a major consideration for the buyer of this organ: I’m quite sure that you will NOT be able to reassemble it and make it work using the original wiring harnesses.  They date from 1938, and so the insulation has become brittle and cracked.  The process of unscrewing all of the connections and then screwing them back on again will almost certainly be destructive to many of the connections.  This means that you will have two choices if you want this to be a fully functional pipe organ (as opposed to just a pretty antique):

2) My dream, which I never followed through on, was to MIDI it.  Actually, that would probably be easier (much less tedium) than making new wiring harnesses.  Each manual, and the pedalboard, and the stop row, would have its own little MIDI board easily wire to the switches.  This would leave you with just four small MIDI cable to replace all those monster wiring harnesses.  And your MIDI controller board would feed a MIDI magnet driver, probably with just one small MIDI cable.  This arrangement would be simple and reliable.  Moreover, you would be able to supplement it with digital stops, MIDI recorders, sequencers, memory banks, and any number of other magical MIDI devices.

You may email me (TimothyMasters@compuserve.com) to ask questions, make an appointment to see it, or place a bid.  I plan to leave bidding open for at least a few weeks, perhaps several months, unless I get an offer too good to refuse.  After payment I would be happy to help you disassemble it here in my home, but you will need some muscle to carry some of the heavier parts.  It breaks down quite well, but some parts are heavy.  See the accompanying short video to get a look at the organ and hear a few notes for a few stops. 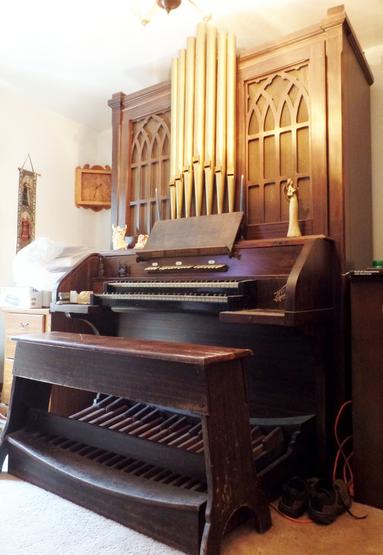